Social CentreTwitter FeedsRSS Feeds
RNA maintains many RSS feeds for fans to use as an easy way to stay in touch with the latest Canberra Raiders and Rugby League news.

Ricky went all in on Hodgson’s Raiders replacement. Now he faces an $800k crisis

There were plenty of exciting centres in the competition this year, see who was named in the @BlumersLawyers 2021 Team of the Ye...

Raiders: 2021 season by the numbers


More >>>
RAIDERS ALERTS
October 21st, 2021, 02:17 PM
Having reached the 2019 grand final and last year's preliminary finals, another top-eight finish was expected from Ricky Stuart's men this season but instead they struggled to a 10th-place finish with a mid-season slump they failed to recover from.

The mid-season departure of star English halfback George Williams obviously had an impact, as did a long-term injury to star fullback Charnze Nicoll-Klokstad from round six to round 22.

But in a high-scoring NRL season the biggest issue facing the Raiders was in defence. Canberra conceded 578 points in 2021 – the most since they finished 15th in Stuart's first season as coach in 2014. The Raiders started the season well, winning three of their first four, before a couple of heavy defeats against premiership contenders Penrith and Parramatta. But losses to the Cowboys, Rabbitohs and Knights followed and the Green Machine found themselves on a five-game losing streak.

They snuck away with a two-point win over eventual wooden-spooners Canterbury before English halfback George Williams departed the club after just 10 rounds, with the team losing four of their next five matches without him. A late rally included wins over Manly and the Eels, but a 4-4 record when the league relocated to Queensland from round 18 wasn't enough to get them into the finals. 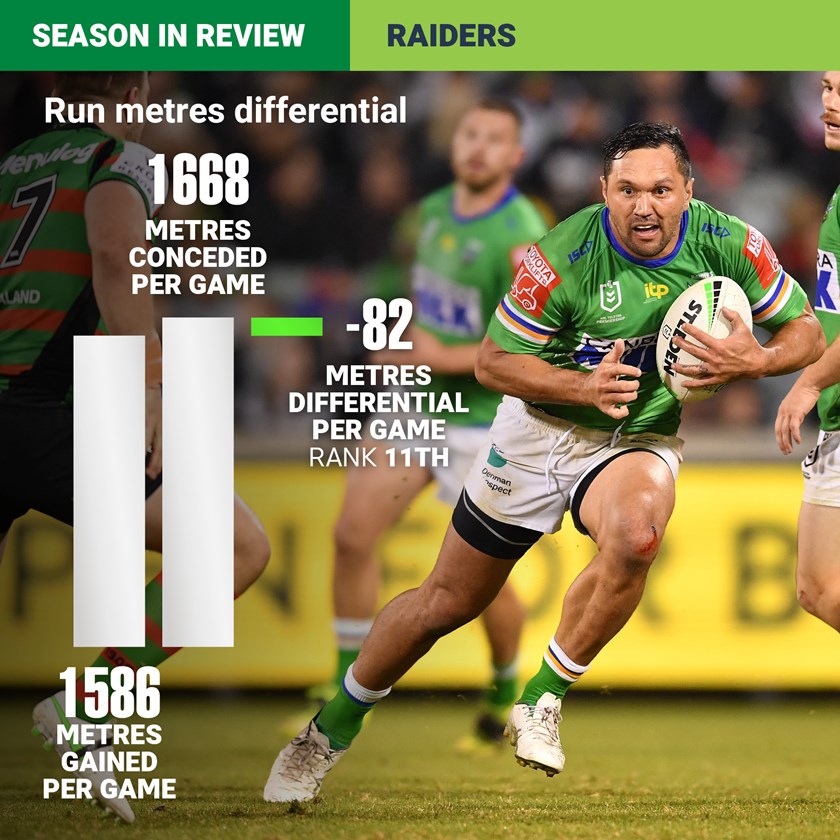 The departures of star England forward John Bateman and metre-eating outside back Nick Cotric at the end of 2020 hurt the Raiders here, with the team's go-forward taking a hit in 2021. Star fullback Charnze Nicoll-Klokstad (161 metres per game) was restricted to just eight matches due to injury, with eventual Mal Meninga Medalist Jordan Rapana (165 metres per game) topping the tally at the club.


October 21st, 2021, 11:02 AM
The Canberra Raiders have continued to build their squad for 2022, with North Queensland Cowboys Prop Peter Hola signing with the club.

Hola, 22, is an exciting forward prospect who has played 12 NRL matches since making his debut in 2019 including three matches in 2021. He’s signed a deal with the Raiders for the next two seasons with an option for a third.

Raiders Recruitment and High-Performance Manager Peter Mulholland said Hola brings a new dynamic to the Raiders forward pack and was the type of forward who would compliment the current Raiders pack.

“Peter’s a big body shape but is also very mobile. He’s predominantly a middle forward but can also play in the back row if needed,” Mulholland said. “He definitely fits the mould of the next generation of forwards coming through, he’s a big guy with a big engine and great leg speed so he’ll be a player who we can help to continue his development.”

Mulholland said Hola was very excited for the opportunity and the club looked forward to having him in the squad.

“As soon as he spoke with Ricky, he was keen to make the move down here. It was a quick negotiation as he liked where our club is heading,” he said. “We’re also very excited to have him join us and we look forward to seeing him for pre-season training in November.”